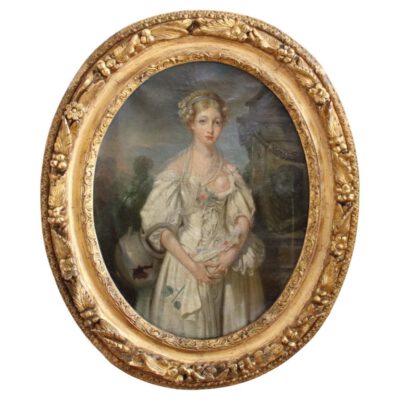 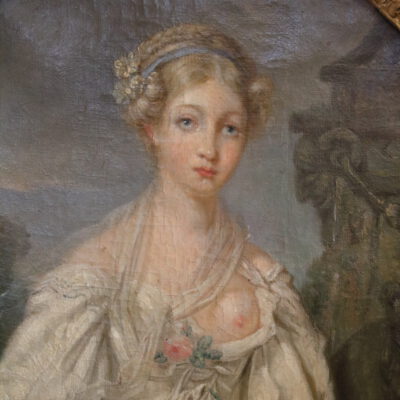 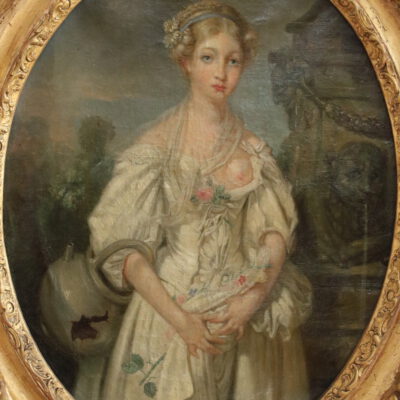 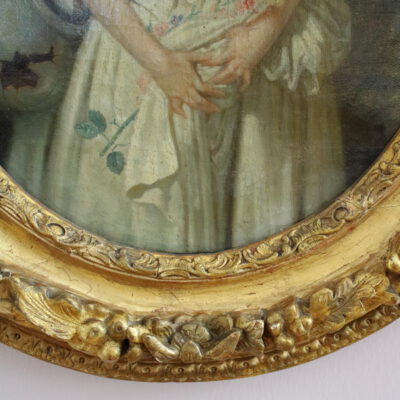 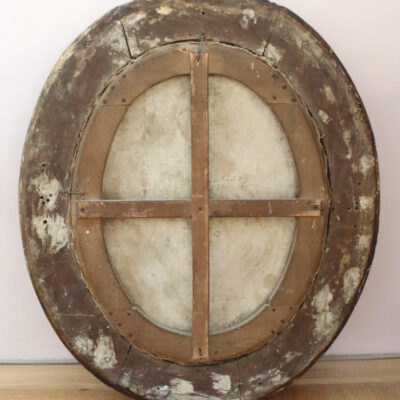 the painting shows a three-quarter portrait of a young blonde girl standing next to a neoclassical fountain with a lion figure as a waterspout. She wears a white dress that reveals her left breast, a delicate chiffon veil partially covers her shoulders, with her apron she holds a bunch of roses. Over her right arm she carries a broken jug, which seems to be the reason for her sad expression. In fact, the broken pitcher can be seen as a symbol of the girl’s lost innocence, as suggested by the painting’s second title “Innocence Lost”.
The painting is a version of the famous painting by Jean-Baptiste Greuze, which is part of the collection of the Louvre (compare Louivre collection website INV 5036 ; MR 1779) : the painting of the Louvre, however, shows a brunette girl in a style already more committed to classicism, while our painting is rather still attached to the Louis XV. Also, the brunette girl appears more surprised than sad, which gives the theme of the composition a more romantic touch. The Louvre preserves another version of the theme, probably a draft of the above-mentioned picture, to which our painting seems to be clearly closer (compare Louvre collection website, Ref.3801): both the hair color (blond) and the facial expression of the girl as well as the lighter, more fleeting style with a greater proximity to Louis XV give reason to assume that our painting was executed according to this draft.
Framed in a presumably 18th century carved and gilt wood oval frame.
Total dimensions incl. frame: h. 22,05 in. (56 cm) x w. 18.50 in. (47 cm) x d. 1.97 in. (5 cm)

Jean-Baptiste Greuze (1725 Tournus- 1805 Paris), studied painting in Lyon in the late 1740’s under the successful portrait painter, Charles Grandon. At the age of twenty-five, Greuze moved to Paris where he entered the Royal Academy as a student. During this period he developed a style of painting which was described as Sentimental art or Sentimentality. He became famous for his sentimental portraits of mainly young girls that focus on the state of mind of the portrayed person.
Greuze was accepted as an Associate member of the Academy after he submitted three of his paintings, 1768 he became a full member of the Academy. The political circumstances of the French Revolution caused him to lose everything he had and he earned his living almost exclusively by teaching painting and drawing. At the age of nearly 80, the painter Jean Baptiste Greuze died in abject poverty in Paris on March 21, 1805.

Condition: good. craquelé and yellowing of surface (former restorations could not be observed), min. losses and fading of frame – detailed condition report on request